Cold Picnic was formed in 2010 by partners Phoebe Sung and Peter Buer, both of whom have backgrounds in fine arts and worked in corporate fashion design – Sung as an apparel designer and Buer as a print designer. The pair met in Boston in 2006 while in school and have been living and working together ever since.

Deeply influenced by national parks, film, interior design and art, the couple began working on various side projects together in an effort to view traditional crafts filtered through modern sensibilities. Before long these projects coalesced into Cold Picnic, a line of textiles, macrame home goods, leather accessories, and handmade jewelry.  Cold Picnic’s work explores imagined and misremembered landscapes, and the effects of time and the elements upon their surfaces.

Sung and Buer design all Cold Picnic pieces from their Brooklyn studio and they work with two small family run factories in Manhattan to cast their jewelry and sew selected bag styles, and another family owned business in India to produce their line of handmade rugs.

Cold Picnic has been featured in publications such as the New York Times, Style.com, Sight Unseen, Refinery 29, Harper’s Bazaar, and Elle. Their studio has been photographed for Coveteur, Elle Sweden, Brooklyn Magazine and Racked New York, and the line is widely available across the United States, as well as in select international locations. 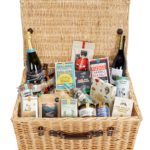