From their start in 2010, Houston-based Khruangbin — the genre-bending psychedelic band consisting of guitarist Mark Speer, bassist Laura Lee and drummer Donald “DJ” Johnson — have pursued projects dedicated to craft, not trend. Founded on a love for Thai funk, this diverse rock ensemble generates a Venn-diagram collection of aficionados. At the close of 2018, a marathon year supporting their discovery album Con Todo El Mundo and adored by both fans and critics, they opted to record an updated version of Vince Guaraldi’s’  “Christmastime Is Here.” The bottom-heavy, rhythmically enhanced take on the quintessentially cool Yuletide joint showed a deeper version of their persnickety  taste to the world. 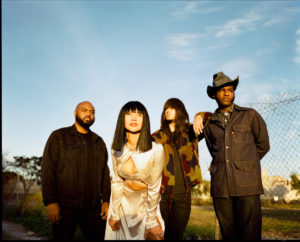 On the heels of a monster leg of a 2019 summer tour without a new album of original material, the band proceeded with Hasta El Cielo, a dub reworking of their earlier work, along with two bonus cuts by renowned Jamaican producer Scientist. Flaunting that atypical, conscious choice for their beat-frenzied hive, Khruangbin, whose name means flying engine or aeroplane in Thai, had agency to explore the root of what their music is. Or at least try.

During 2018 and amidst playing 130 dates, vocalist Leon Bridges and the trio converged for a joint North American tour, a run of shows stretching from Los Angeles to New York. Although their musical lanes were slightly different, they shared a dusty, laid back vibe. Houston and San Antonio are about fours apart in a dependable truck. Texas was the connection. When a Khruangbin session yielded a song that seemed like it might pair well with Bridges’ voice, the band sent it over. Bridges returned the track with his vocals the very next day. They all soon decamped to the studio with engineer Steve Christensen, hoping to make it into a B-side. But everything flowed so naturally, it was obvious this would be something bigger, leading to Texas Sun.

With this four-song project, a début collaboration of the two Lone Star artists, both parties appear to have leveled-up, providing each camp with something that was previously missing. Finally, one of the best rhythm sections working in rock today flirts will all the possibilities of having a commanding  lead vocalist anchoring their global funk compositions…And Bridges gets the well-deserved percussive ensemble —a millennial Sly and Robbie —allowing his trademark raspy vocals the chance be selective. He’s no longer doing all the heavy lifting. Those harmonies, that groove, puts the bass-weight respect on it.

Witness the whisper-cooing, game spitting: “She got them red heels on/Gold hangin’ from her ears/Melanin lady/She got her jig on strong”, crushing the inner meter from “C-Side”.  Bridges rinses an early 70ʻs Motown “Funk Brothers” touch up, that fits.

“Texas Sun”, the single, finds us deep in-country twang with full soul colors from Bridges flying the ship. It’s a Ray Charles type of gallantry: Twangy, sullen and eloquent. This Houston power trio likes mixing shit up. It’s what they do best. Steel guitars, slow-rolling back beat, strums of flamenco-style guitar and hints of concertina honking along in the background. This Big Sky Country view from the highway could easily play while exiting the craziness of SXSW in Austin, where art-school kids DO drop acid. Gazing at the Kodachrome vistas en route to Fredericksburg 80 miles west, everything stays bigger in Texas.