Combining a 1970’s color wheel aesthetic with a deep sullen tone that proselytizes a fluffy bunny rabbit might not make it, “Satsuma” is that alluring “something is out of alignment” video by the New Zealand psych outfit Mermaidens.

The video was filmed and directed by Ezra Simons, with concept and styling by band member Gussie Larkin and art direction by another band member, Lily West. It was shot in Gussie’s parent’s 70’s house in Wellington, NZ, which had been done up in the 80’s by a big nightclub owner. As she explains;

“There are lots of sleazy features like a gray leather ‘conversation pit’, black marble faux fireplace and of course a sauna and indoor pool. We were really lucky to have access to such a cinematic environment.”

The track, a brooding up-tempo dirge with teeth, showcases Mermaidens affinity to channel all the effective audio cues from Sleater-Kinney, Fugazi, and The Stooges. “Satsuma” is that dark sparkle you just can’t shake.

Remembering #KurtCobain today on what would have been his 53rd birthday (born February 20, 1967) | Revisit his musical legacy—including audio & video highlights—here: https://t.co/kxQlL6u973 @Nirvana 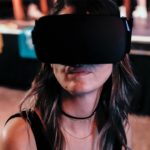 VR Is The Future Machine